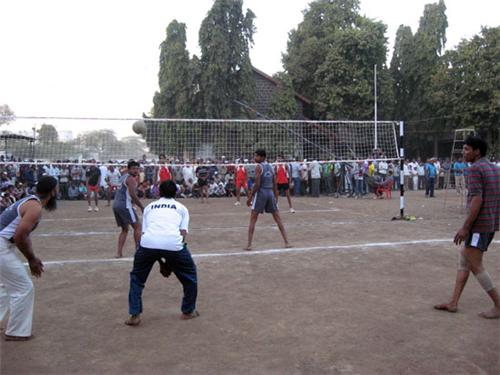 The sports sector in Malegaon is not a very well-developed because the city is not much advanced in terms of sports infrastructure and even in terms of the facilities available for people. People in Malegaon are not much into sports, but volleyball and cricket are widely played in several parts of the city. There have been no eminent personalities representing the city or the state in any of the sporting activities which is played in India at the National or International Level.

Volleyball is quite a popular game in Malegaon and the city team has won many trophies and prizes in various competitions at the state level. The city holds a National Volleyball tournament every year and has won the championship many times. MMC or Malegaon Municipal Corporation and Mushtaq-Ayyub-Sajid-Khurshid-Raju or MASKR which denotes the senior group of volleyball players of the city held the National direct shooting volleyball tournament last year. About 14 teams of Malegaon and 16 teams from various districts of Maharashtra participated in the competition.

Football is not much popular in Malegaon and there are no initiatives being taken by the people or the government to motivate youngsters in this field. However, it is surprising to find that Malegaon possesses a football club called Malegaon Football Club or MFC that tries its level best to encourage good football players in Malegaon. Many young volleyball players are also motivated to become a part of the national volleyball team representing the city.

Like any other city in India, Malegaon also boasts of having cricket crazy fans. Though sporting activities are not very common in Malegaon, cricket is very popular among the people of all ages here. There are no cricket stadiums found in Malegaon but there is one located in Nashik and this serves to be of good use for the people of Malegaon. However, Malegaon possesses its own cricket association called the Malegaon City Cricket Association or MCCA, which is worth a special mention. This association encourages many young cricket players and offers all assistance to make them a future star of the much celebrated sport of India.

Other Sports in Malegaon

Tennis is another sport that is not very common, but some people in Malegaon love playing tennis. There are a number of good training academies for sports in Malegaon where people can always get themselves trained in sports like football, cricket and tennis. Other sports that are a favorite among the people of Malegaon are kho-kho and Kabaddi.

There are a number of good stadiums in Malegaon and there is even a cricket stadium called the Chatrapati Shivaji Stadium in Nashik. Other stadiums located in Malegaon include MMC Ground, Abdul Azeez Kallu Stadium, MSG College Ground, KBH Sports Ground and Star Club Ground. These stadiums have held many games held between India and foreign countries.

Though sporting is not a widespread activity in Malegaon, there are some good sports stores found in the city. The sports stores that are located in Malegaon serve the best quality sports equipments and tools.