While taking a close look at the geographical location of Malegaon, you will find that the city enjoys surplus amount of water, owing to the presence of two important rivers that flows through the city namely, Girna River and Mosam River.

The Girna River originates towards the west of Kalwan Taluka that lies very close to Haran Bari Hills. This river also possesses the rain water from Shaptsuangi and Chandwal. The river is 240 kilometers long and at its end it confluences with the Tapti River close to Nandgaon in an area called Khandesh. Half of the Girna River flows into the district of Nashik while the other half flows into the Khandesh region.

The Girna River flows into a plain region in the district of Nashik. In both Khandesh and Nashik, people practice horticulture on a very wide scale. The main crops that are cultivated in Nashik and Khandesh are grapes and sugarcane. The district of Nashik is very popular for grapes. A dam has been constructed on the Girna River at a distance of 15 kilometers towards the east of the city of Malegaon. Drinking water to the district of Jalgaon is supplied by this dam. Water from various channels of the Girna River is also used for cultivation of crops on a very large scale. There are two sugar factories located by the banks of River Girna. One sugar factory is at Ravalgaon while the other one is located at Dabhadi, in the city of Malegaon in Maharashtra. 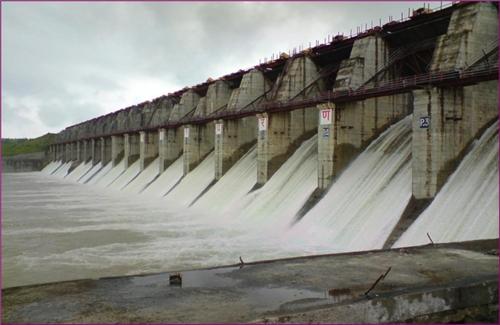 Another very important river in the city of Malegaon is the Mosam River. The river originates from an area known as Salher Mulher in Sahyadri Ranges that lie towards the Northern part of Malegaon. The Mosam River is 81 kilometers long and there is a dam that has also been constructed on it at a place called Kalwa in Chankapur Taluka. The Chankapur Dam supplies drinking water to the people of the city of Malegaon. After the rainy season is over in Malegaon, the river basin of the Mosam River dries out because of lack of water flow owing to the existence of the Chankapur Dam.

There are a total of six bridges that have been built on the Mosam River from east to west. The oldest bridge on the river is called “Bada Pul” or Big Bridge locally and it was built by Ahilya Bai Holkar. It was closed for completely after it experienced a number of breakages. There are two more bridges apart from the Big Bridge. The Britishers have constructed the middle bridge during their regime in India and Malegaon Municipal Council built the third bridge.

People, for travelling purposes use both the second and the third bridge. The fourth bridge on the Mosam River is called Ambedkar Bridge and this bridge has also been built by the Malegaon Municipal Council. This bridge serves to be of good use for the people who live in Sangameshwar area in Malegaon. Sandway is the name of the fifth bridge in Malegaon and it is also the smallest bridge found in the city. Ramsetu Bridge is the sixth and the last bridge found in Malegaon and this has also been built by Malegaon Municipal Council. These are some of the main rivers of Malegaon that are considered to be of good use for the people of Malegaon.

Explore more about Geography of Malegaon