Localities or Areas in Malegaon 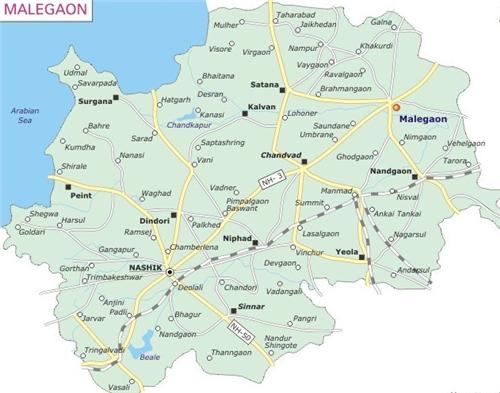 Malegaon is located between 20'32' Northern latitude and 74.035' Eastern latitude. It is located at a distance of 108.63 kilometers towards the North-East of the district of Nashik. The total area covered by Malegaon tehsil is around 87.74 hectares. Chalisgaon in Jalgaon district lies towards the east of the city of Malegaon while the Kalvan and Satana Talukas lie on the western side of Malegaon. The district of Dhule lies to the North of Malegaon and Chandwal and Nandgaon talukas lie towards the south of the city of Malegaon. The Malegaon taluka consists of 155 large villages and 76 very small villages and it ranks second after Nashik among the largest cities of Maharashtra. The taluka of Malegaon also consists of 14 Gram Sebhas and 138 Gram Panchayats that are completely independent.

The city of Malegaon is well-connected to the other cities of Maharashtra as it is located on the Mumbai-Agra National Highway No: 3, which makes it to grab the interest of many real estate investors in Maharashtra. Malegaon is comprised of three specific as well as distinct divisions and they are the Camp area, Sangameshwar village that lies on the left edge of River Mosam and the older quarter of Malegaon.

There can be absolutely no doubt in the fact that the city or the Taluka of Malegaon consists of a number of small and large villages that make up the city called Malegaon. Malegaon is fast developing in the form of a cosmopolitan city and the entire credit for such wide scale development in Malegaon goes to the district of Nashik. Major developments that have taken place in Nashik have paved the way for such developments to take place in the city of Malegaon and the same thing is being done again and again by the Government also. The main areas of Malegaon or the places that constitute the entire area of the city have been listed below: