Entertainment and Nightlife in Malegaon 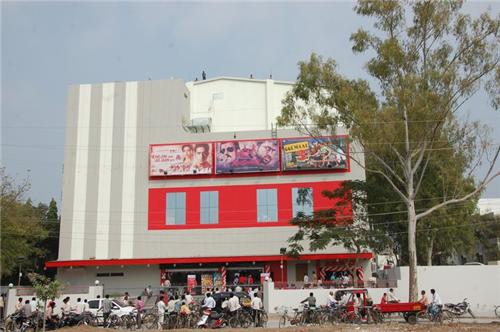 The Cinemax Sandesh Multiplex in Malegaon is the first multiplex mall of the city
Life can become very boring and dull for an individual living in a city if there is no means of entertainment or nightlife. People nowadays, have become very modern and professional and they are always on the look out of those options that can offer immense entertainment to relieve them off their tight schedule.

When it comes to entertainment Malegaon has a fair share of movie halls that have regular shows of all the latest movies. Malegaon does not possess a very vibrant and exciting nightlife, but it lies very close to Nashik which can offer a vigorous and lively nightlife to the people.

The fact that the city of Malegaon possesses very few entertainment options is very true, but at the same time it is also worth mention that the city also possesses some of the best movie halls for the entertainment of the people. The most modern forms of movie halls known as multiplexes are available in Malegaon and these centers are flocked by people of all ages during weekends and holidays. The multiplexes in Malegaon are well-equipped with all modern forms of entertainment as they are built with kids play areas, gaming zones, eateries and shopping malls keep the crowd engaged. A famous movie hall in Malegaon has been listed below:

Pubs and Bars in Malegaon

Pubs and bars are also not very common in Malegaon because people in the city are very simple and are not open to such forms of entertainment. There are some wine shops that operate in Malegaon and people satiate their craving for such drinks through these shops rather than heading to a pub or a bar. The tourists can drive to Nashik to get a sip of their favorite cocktails at the bars or pubs found there. There is a famous pub and bar located in Nashik and its details are given below:

The people of Malegaon are not keen in partying late night or spend time in a disco, which explains why there are no discos found here.  There are some discos found in Nashik but they too are not very popular in the city.