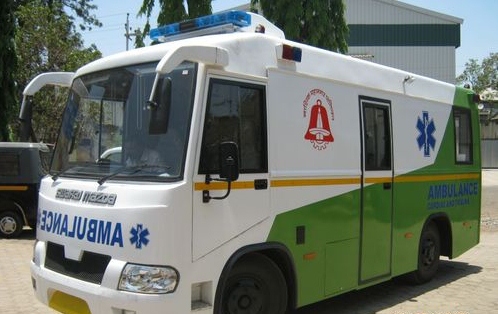 Trauma and Cardiac care ambulance that plies in Malegaon offers immediate medical assistance
Emergency services in Malegaon are of high quality and the people of Malegaon feel themselves secure and safe in the city. Emergency services in Malegaon include police stations, fire stations, disaster management, hospitals, blood banks, eye banks, chemists and ambulances and all these services are very well-developed. The people of Malegaon do not suffer from the inability of availing such services during any kind of an emergency at some odd hours of the day.


Emergency Numbers of the Police Stations in Malegaon

Fire services in the city of Malegaon are available for the people twenty-four by seven and all the fire stations located in the city have the ability of meeting any emergency conditions faced by the city at any point of time. The fire stations possess various modern equipments and tools for extinguishing fire and it is also worth mentioning that this sector of the government also provides jobs to the people of Malegaon. The address of the main fire station located in Malegaon has been provided below.

There are many blood banks are located in Malegaon and the people enjoy huge advantages from these blood banks. The blood banks carry out all the necessary procedures required to be done before getting the samples of blood from any individual. These blood banks have well established connections with various hospitals or nursing homes in the city which helps it to save many lives. The staff and the personnel at these blood banks are trained people and they have the expertise in dealing with all emergency conditions. The contact detail of one of the most important blood banks in Malegaon has been provided below:

There are no eye banks in Malegaon and the ones that are found available in the service are located in Nashik. The eye banks provide unique and in time services by carrying out all sorts of tests and evaluations before acquiring the eyes of an individual. The storage systems of these banks are of the best quality and the patients as well as the donors feel at home in dealing with these banks. A well-known eye bank in Malegaon has been detailed below:

Chemists are widely found in all the cities and towns of India, but the chemists who provide twenty-four by seven services are not easily available in all such cities and towns. Malegaon is one city in the Nashik district that can boast of possessing chemists that provide their services twenty-four hours to the people. Even the hospitals in Malegaon possess their own separate chemist shops that have the ability of meeting the emergency requirements of the people of Malegaon. One popular chemist shop located in Malegaon has been listed below:

There are various organizations in Malegaon that carry out the task of taking care of stray animals and the animals that do not possess anybody who can care for them. Animal care is a big issue in Malegaon and this is the reason why a number of animal care organizations have come up in the city and one among them has been detailed below: